Photos of Jude and Ruby at the local 2012 Pinewood Derby in Pensacola, Florida, for Pack 608. 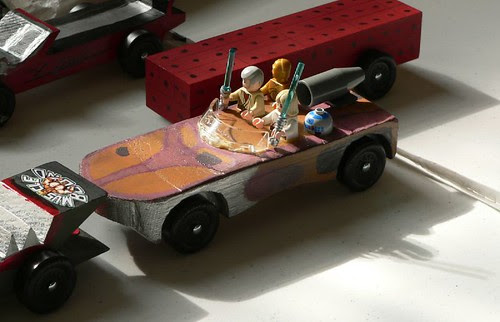 Jude and I built a Pinewood Derby race car this week. He decided he wanted a Star Wars design. Then, he decided, specifically, on the Luke Skywalker landspeeder. He helped with sanding, painting, and wheel attachment. He did a great job on the paint color mixing and painting the main parts of the design.

The car finished third overall in his age group (Tiger Cubs) and won the Most Original Design award. He gets to go to the district competition next, since he was in the top three.

We were mostly just aiming to make this car look cool. But, his car was surprisingly fast, getting off to a huge lead in the first run, and finishing first in three of the five runs his car completed, and a close second in the other two. (Someone accidentally removed a shim under the track before one of his heats, creating a bump in the track that sent his car flying through the air, off the track. I don't think they re-ran that heat, but I'm not sure why.)
Posted by James Barger at Sunday, January 22, 2012